Graduation from the LDC category is accelerating

Nevertheless, among those who have not yet graduated, 11 have fulfilled the criteria two or more consecutive times, whereas four LDCsLeast developed country are scheduled to graduate in 2023-2024 (see Map 1) - Bhutan in 2023, and Sao Tome and Principe, Solomon Islands and Angola in 2024. Others will undoubtedly follow suit. Graduation will be a milestone in the path of achieving SDGsSustainable Development Goal, particularly those broadly defined as economic -—
– ‒
- –
—--—
– ‒
- –
—--—
– ‒
- –
—--—
– ‒
- –
—-, namely, Goal 1 – no poverty, Goal 8 – decent work and economic growth, Goal 9 – industry, innovation, and infrastructure.

The concern of the approaching wave of graduations is that an increasing number of graduating countries have exhibited a low level of economic diversification, usually relying for its development on a handful of sectors, examples being: Equatorial Guinea on natural gas, Samoa and Vanuatu on fisheries and tourism, Cape Verde on fisheries, tourism and remittancesThe term remittances can refer to three concepts, each encompassing the previous one. “Personal remittances” are defined as current and capital transfers in cash or in kind between resident households and non-resident households, plus net compensation of employees working abroad. “Total remittances” include personal remittances plus social benefits from abroad, such as benefits payable under social security or pension funds. “Total remittances and transfers to non-profit institutions serving households (NPISHs)” includes all cross-borders transfers benefiting household directly (total remittances) or indirectly (through NPISHs) -—
– ‒
- –
—--—
– ‒
- –
—--—
– ‒
- –
—--—
– ‒
- –
—-., whereas Angola, soon to graduate, relies on oil. Indeed, the latter country intends to graduate using “income only” criterion.

Thus, the issue remains about countries’ economic vulnerability and subsequently sustainability of their development trajectory. Reliance on a very limited number of sectors makes a graduating country particularly fragile towards external shocks, e.g., fluctuations in the international price of the commodity it trades. One can easily imagine that a country risks falling back into the spiral of low growth, poverty and inequality, as state revenues diminish.

The key role of productive capacities in progressing towards the SDGs

Table 1. SDG Indicators included in UNCTAD PCI
* Only PCI categories including SDG indicators are shown here.
** The SDG indicator is taken in a slightly different form in the PCI.

Productive capacities are crucial to enabling smooth transition from the LDC category. They are critical for graduating with a momentum and that the developmental drive which allowed for graduation continues beyond as it is essential for attaining sustainable development and achieving structural transformation.

Ethiopia’s overall score is 23.5, hence lower than that of Zambia (Figure 1), though higher than Angola, making it 170th in the world, and 17th in Africa. Among the three countries it has achieved the greatest progress since 2000, when its score was 16.6, though it remains below the average for LDCs and LLDCs.

Interestingly, the same order in ranking is within the category on structural change, which depicts the movement of labour and other productive resources from low-productivity to high-productivity economic activities (Figure 2). Structural change category demonstrates the difficulties that Angola, Ethiopia, and, to some extent, Zambia and many other LDCs face with economic diversification, making their economies vulnerable to external shocks.

Policies centred on fostering economy-wide productive capacities and structural transformation should be a priority for LDCs. Zambia’s economy has shown some structural shifts over the years with industry and services sector contributing a lion’s share to the country’s GDP. Within Africa, Zambia’s scores in structural change component show some volatility, but mostly the country has performed above its peers in the region and countries at similar stages of development for the period 2000-2018 -—
– ‒
- –
—--—
– ‒
- –
—--—
– ‒
- –
—--—
– ‒
- –
—-. In Ethiopia, although agriculture makes up more than a third of GDP, its share has been steadily shrinking. Over the past decade, Ethiopia’s high growth rates have been driven primarily by the service and industrial sectors which, respectively, accounted for 36.5 per cent and 27.3 per cent of GDP in 2018. The substantial increase in the score between 2000 and 2018 gives hope for further advancements.

Figure 2. Structural change component of the PCI for selected countries and regions

Angola’s, Ethiopia’s and Zambia’s development predicaments – as depicted by their PCI – are illustrative of the situation in many LDCs. Like many African LDCs, however, the countries are well placed to build up their productive capacities, eventually graduate with momentum and embark on the sustainable development trajectory. Ensuring that rents generated through resource extraction are used to foster productive capacities is among the first steps for Angola and Zambia; both have ranked relatively high in the natural capital category of PCI. 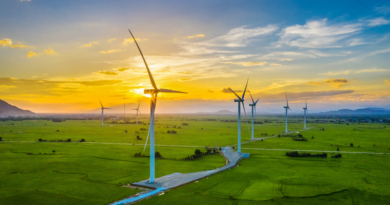 Make or break for green economy